A friends’ birthday’s coming up, and two of us have gotten together to give him a great present.

A guitar’s the gift, but we can’t just give the birthday boy a used guitar! We decided to put a speaker into the body of the guitar, but in testing (before drilling) we found that the bass strings overtook the treble. We had two choices: a simple equalizer, or two speakers.

After we chose to use two speakers, we tried a few things to get the desired effect. The simplest approach, the approach used in mass-produced dual-speaker systems (think plastic boombox), is to use a filtering capacitor for the bass speaker, and feed the plain signal into the treble speaker.

This approach was dismissed for two reasons:

Our second point became moot in the end, as we ended up using three op-amps to make the 1x buffer/ 2x equalizer, and an additional two op-amps to drive the speakers themselves. We could have used the fourth op-amp as an adder, and fed the output to one speaker. However, the clarity would have suffered so we went ahead with a two speaker design. 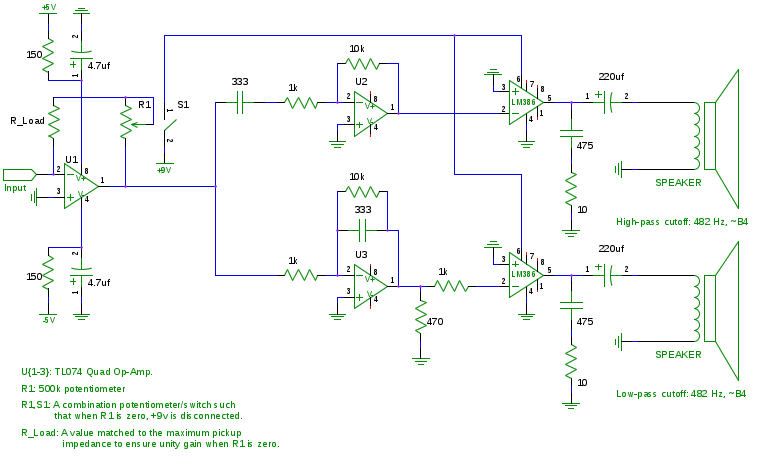